Do it with willingness 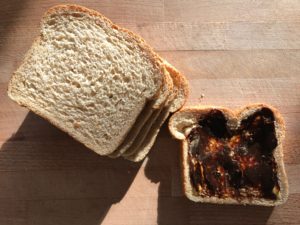 I recently put my name down on the canteen volunteering roster at my son’s school, something that I’ve managed to avoid for a number of years now. (I’m not proud of that, but me and kitchen’s just don’t get on that well.) After grumbling and mumbling to myself about the whole 90 minutes I had just committed to, as well as thinking about all the other things I could be doing, I had a moment of reflective insight slap me in the face. If you’re going to put your hand up, then at least do it with willingness Deborah!

This totally changed my whole experience and perspective of the 90 minutes I spent making cheese and vegemite sandwiches. I ended up bringing energy and enjoyment to the morning as opposed to reluctance and grumpiness, to both myself and to the other volunteers.

I imagine there are many times we could shift our attitude on certain things we should do more of but don’t really want to, which can also help inspire more productive outcomes.

I know with the teams I work with, all too often the grumbling is about how management have no idea what they actually do on the ground and are therefore pretty out of touch and lacking influence. There could be a multitude of reasons why the echelons of management can’t get involved more at the team’s level (time, resources, interest…,) but imagine the impact if there were more visits, chats and even hands on work with the teams, and all done with willingness?? It would be huge.

Elon Musk recently wrote a letter to his Tesla employees, promising more personal involvement to help reduce the safety incidents. He not only asked that every injury be reported directly to him, but that he meets the injured person and will then go to the production line to perform the same task they they perform. You can’t help but feel the willingness reverberate in his words, and it’s hard to doubt his commitment to follow through.

Next time there’s an opportunity for you to get more involved in something you don’t particularly want to do, do it, and with a healthy dose of willingness, it will probably bring a whole new experience that not only you, but others, will benefit from.